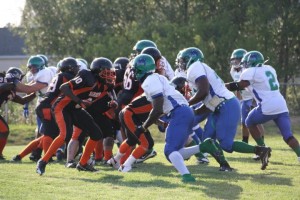 The Springfield Foxes vs the Monona Warriors

The Springfield Foxes 4-1 (2-1) took to the road on Saturday night 7-28-12, looking to push their winning streak to 7. Not only were they trying to extend the streak, but also to improve upon their #13 national ranking. Waiting for them were the Monona Warriors 3-1 (2-1) having won 4 in a row at home. The Warriors were looking to pull the upset, which they did 16-12, bringing their own home unbeaten streak to 5 games.

The first half was one of excitement, but very little scoring. Both teams would drive deep into the others territory, only to be turned away by the defenses. “We were in the red zone quite a bit, we just couldn’t punch it in.” Says coach Kirkendoll. ” Give credit to both defenses, they both were ready to play from the onset.” Part of the Foxes problem may have been the short handed offensive line, with 3 starters unable to make the lengthy trip. “The main problem with semi-pro football are the long road games, with the players not being paid, they work regular jobs, and sometimes you can’t travel for work or family reasons.” The Foxes offense managed to hit paydirt before halftime, with the Foxes leading rusher, Courtney Molton, finding the endzone. This put the Foxes ahead 6-0.

The second half looked much like the first, with both defenses in the spotlight. Mussa Elayyan recorded 2 sacks. Defensive tackle Darion Phiffers’ interception also sparked the Foxes defense in the second half. Despite the defensive effort, the Warriors would score and add the 2 point conversion to take an 8-6 lead going into the fourth quarter. The fourth would see the Foxes take the lead behind a run by QB Drew Fendrich, who ended the night with a team record 312 yards passing and 67 yards rushing on 6 carries. The two point conversion attempt failed and left the Foxes up 12-8 with plenty of time remaining.

The two teams would exchange possession, with the Foxes failing on a 4th and goal attempt with 3 minutes remaining on the clock. That is when Monona put together a 95 yard drive, capped with a 20 yard touchdown pass on 4th and 7, to put up the final score, 16-12.

The Foxes travel to Joliet on 8-4-12 to take on the Joliet Buccaneers at 7p.m. Both squads are tied for second in the division standings, assuring this will be another tough test on the road. The Foxes will return to the area and host a Benefit for Allison Faith Hill on August 11th at the new SHG Stadium in Springfield. The Foxes schedule, tickets, merchandise, and information can be found at SpringfieldFoxes.com. All home games are broadcasted by 94.3 WMKR, Taylorville’s Genuine Country.