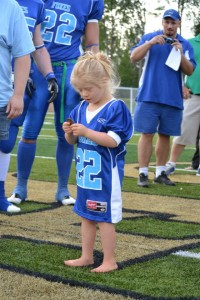 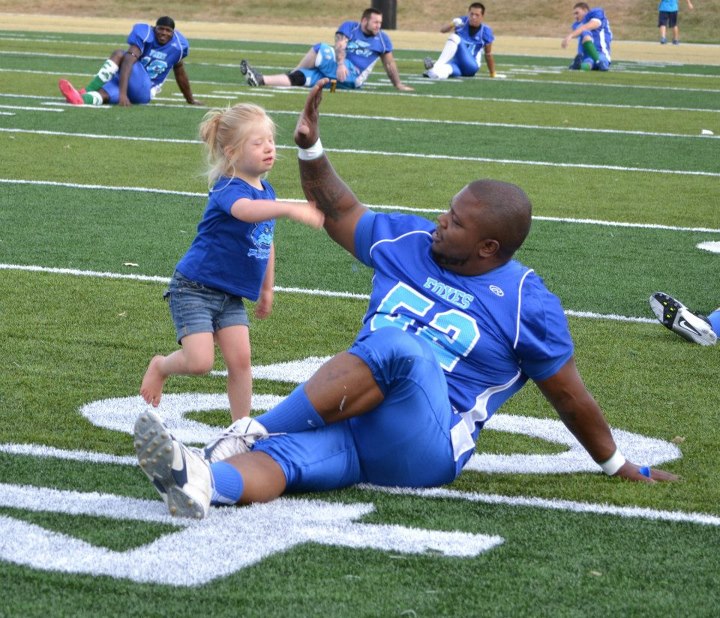 August 11, 2012 was a very special night in many ways! It was a night when the entire Springfield Foxes organization was honoring a young 6 year old warrior by the name of Allison Faith Hill. Alli has been battling many health problems since birth. Through one obstacle after another, she continues to battle and stay strong. First Alli got to hang out on the field and meet the players during warmups. The Foxes dedicated the game to Alli in a pre-game ceremony where she was given her own customized number 22 jersey. Alli’s favorite Foxes player is none other than #22 Jae Russell. Alli had the honor of performing the coin toss to open the game as well. This was also the Foxes first ever game in their new second home, that being the multi-million dollar friendly confines of SHG Stadium on the newly renovated campus of Sacred Heart-Griffin High School in Springfield, IL.

Many Foxes players also shot videos during the week leading up to the “Game for Alli”, in which they provided words of encouragement for this courageous little lady. Jae Russell masterfully edited the videos together along with a plethora of pictures from Alli’s first 6 years of life. The song “Angel” by Sarah McLachlan was played in the background as this very emotionally moving video presentation played on the stadium’s jumbotron.

The Foxes then used all of the aforementioned motivation to put up a strong fight of their own on the way to a 32-14 victory. This marked the first time the Foxes 6-1 overall (4-1 in the MSFL) have beaten the Lincoln-Way Patriots 2-3 (2-3) since the two teams began playing each other on an annual basis in 2010, the Foxes inaugural year. On a night where more Foxes records would be broken, the defense would come up big in the second half to secure the victory.

Dr. Todd and Eugena Austin from Austin Family Chiropractic in Virden, IL stayed busy on the Foxes sideline for much of the evening as well. Dr. Todd serves as team Chiropractic Physician and team Trainer at all Foxes home contests, while Eugena is team Massage Therapist and Assistant Trainer. In fact, while the folks from AFC were providing care to #22 prior to game time, they even got to meet Alli and her mother. Dr. Todd & Gena stayed busiest before and during this contest providing care for many calf and hamstring injuries. They also worked on players as well as some coaches and extended members of the Springfield Foxes family for low back, neck, midback, hip, shoulder and knee issues as well as one “stinger”. 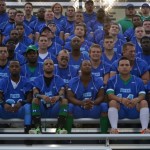 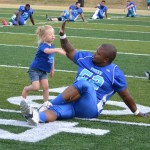 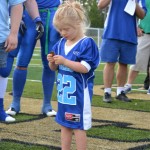 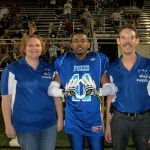 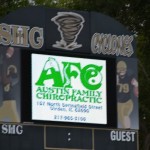 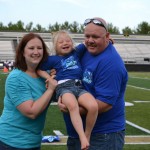 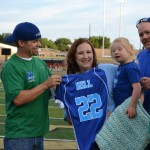 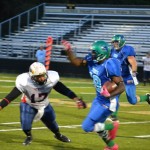 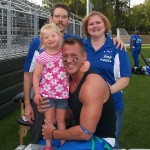 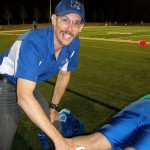 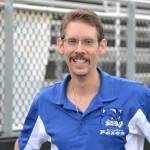 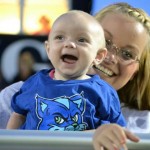 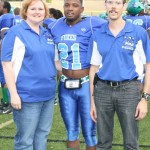 Dr. Austin debuted his special Springfield Foxes Cold Laser Therapy Device an hour and a half prior to gametime! He worked on many calves, thighs, low backs and shoulders with it over the next 4 hours. Dr. Todd also did quite a bit on Kinesiotaping as well. He even used a Leukotaping procedure that he recently learned from Kevin Morris ATC, the head athletic trainer of Brigham Young University, to stabilize a slightly torn hamstring muscle. He was able to clear a player to go back in the game with this tape job, allowing the player to be pain free and highly productive. In fact #16 even recorded 6 solo tackles on the night.

The game would start in typical Foxes fashion, forcing a 3 and out, giving the high powered offense the ball early. After a 40 yard run by Courtney Molten, QB Drew Fendrich would hook up with Rick Packingham for a 27 yard touchdown pass, giving the Foxes a quick 6-0 lead. On the ensuing drive, the Patriots would connect on a long pass play, and would take their only lead of the night, going up 7-6 after PAT. As the second quarter begun, so did the Foxes offense, getting on the scoreboard twice, first with a 47 yard touchdown run by Molten. The Patriots would drive the ball inside the Foxes 20, only to miss the field goal and the chance to pull within 2 points. After the turnover on downs, the Foxes would mix it up and drive to the Patriots 5 yards line, where Fendrich would find RB Martez Turner for a touchdown pass and take a commanding 18-7 lead into the locker room.

The Foxes would have the ball coming out and would put on the aerial display once again with Fendrich hitting TE Jamel Ward for a 26 yard touchdown. The Patriots would not back down, completing another long pass for their second touchdown, pulling the score to 26-14. The defenses would take control from that point forward with very few points to be added after the first two drives of the half. The Patriots would stop the Foxes on the following drive, only to have the Foxes defense, number one in the entire MSFL, forced a fumble and killed any momentum they had at that point. “The defense stepped up big again tonight, allowing our offense to really get their wheels in motion, showing just how dangerous we can be.” says Jason Kirkendoll, an assistant with the Foxes.

The fourth quarter would showcase the Foxes defense, as they would force two more turnovers to keep the Patriots out of the end zone. The Foxes offense wasn’t quite done either, Fendrich would hook up with his favorite target this season, WR Chris Hampton, for a 41 yard touchdown completion to complete the scoring and give the Foxes a 32-14 victory.

Fendrich would end the night 11 -17 with 303 yards passing and 4 touchdowns. Fendrich, who needed only 224 yards to break the single season Foxes record, became the teams all time yardage leader for a single season, with at least 3 more games left on the schedule. Molten would carry the ball only 9 times, but would finish with 127 yards and a touchdown. This was #32 Molten’s final game as a member of the Foxes, as he will be moving on to pursue a potential college football career as a University of Nebraska Cornhusker. Molton was followed in the running game by #20 Akeem Topps, who had one carry for 71 yards. Chris Hampton would lead the receiving corp once again, finishing the night with 3 catches for a touchdown and 143 yards. On the defensive side, Jae Russell, Chris Rude, Lance Still and Carleston Acres would lead the way with 6 solo tackles each. Aaron Wells would recover the 3rd quarter fumble for the Foxes, while Garland Walton would record an interception. Chris Lipscomb had the lone sack for the Foxes defense this week. 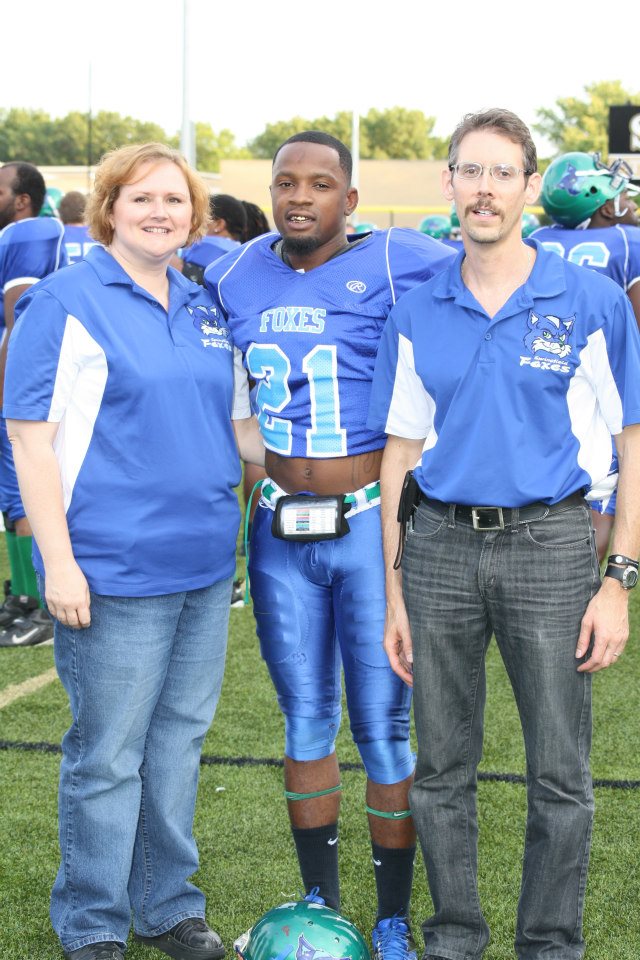 The Foxes will travel to take on the Mustangs from Indianapolis, Indiana on Saturday 8-18-12. Both teams come into the game with identical 4-1 league records, with more than just bragging rights on the line. Coach Kirkendoll added ” This may not be a Divisional game, but it will count a lot when the playoff seeds are determined. Any team we can gain the tie breaker over is one step closer to that first round bye.” “As long as we keep putting up the numbers we do on offense, and playing hard nosed, hard hitting defense, we will continue to prove to the MSFL we are a contender.”

The Foxes have been an underdog every week this season and things are the same heading to Indiana, where they are picked by league members to lose to the Mustangs.

The Foxes return home on August 25th to take on the Chicago Thunder, with the Division Championship on the line. This game will be played at the teams other home, John B. Pacotti Field in Kincaid, IL. All home games are broadcast on Taylorville’s Genuine Country 94.3 WMKR. The Foxes schedule and information are available at
SpringfieldFoxesChiro.com.

All photos by Erin Hollinshead, Angela Kirkendoll and Andrea Hill.

And finally, here is the presentation that Dr. Todd gave to his Toastmasters Club about the “Game for Alli”.

One thought on “Springfield Foxes move to 4-1 while defending their new home turf in the “Game for Alli”.”