After a heart breaking last minute loss in Wisconsin last week, the Foxes 5-1 (3-1) looked to bounce back against the Joliet Buccaneers 2-5 (2-2). The Foxes were looking to separate themselves from the middle of a 3 way tie and possibly climb back into first place in the division. This game would have the usual Foxes storyline, with the offense putting up big numbers while the defense continued their stingy ways in the 28-12 victory.

The Foxes would break into the end zone first, going ahead with a run by Martez Turner, putting the Foxes ahead 6-0 after a failed point after attempt. The Buccaneers would counter with a drive of their own, scoring themselves, but the Foxes Jae Russell would block the PAT and the game was then knotted at 6-6. The teams would then trade possessions, with the Buccaneers eventually getting the ball inside their own 5 yard line. With the defense putting constant pressure on the Bucs’ offense from the opening possession, the snap went low and the Foxes would get the safety, putting them ahead 8-6 after the first quarter. 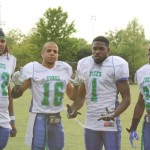 A little Foxes pregame fun before defeating the Buccaneers. 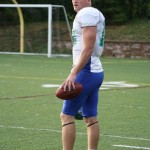 QB Drew Fendrich getting ready to light up the “D”. 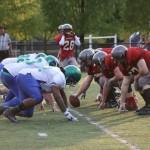 The Springfield Foxes move up to 3-1, while the Joliet Bucs drop to 2-2.

The second quarter would see more defensive plays made by the Foxes, while the offense used the running game more than it has all year, racking up 256 yards on 26 carries, chewing up both clock and yards to keep the game moving along. Quarterback Drew Fendrich would take one in himself, and after his 2 point conversion pass to Gary Miller, the Foxes would be up 16-6 at the half.

Following a scoreless third quarter, the Foxes went on the offensive once again, with Martez Turner and Darin Utley both recording touchdowns on the ground. Despite the defensive showcase, in which the Foxes recorded 12 sacks, the Bucs found the end zone one more time in between Foxes 4th qtr TD runs, actually cutting the lead to 22-12 at one point. Utley’s touchdown would be the final score of the night, leaving the final margin 28-12.

The Foxes would end the night with over 500 yards in total offense to go along with their 28 points. Quarterback Drew Fendrich completed 11 out of 23 for 261 yards and 2 interceptions. Fendrich heads into the next game needing only 283 yards to break the Foxes single season record for passing yards. Running back Darin Utley ended the night with 100 yards on 8 carries. Also in the running game, Martez Turner had 55 yards on 7 carries, and Fendrich had 78 yards on 6 carries. Tight end Jamel Ward ended the night with 102 yards receiving on four catches followed by wide out Chris Hampton who had 87 yards on 3 catches.

Defensively the Foxes were lead by Chris Rudolph and Mussa Elayaan with 3 sacks each, on the way to a new team record of 12 sacks on the night. Elayaan would lead the team with 7 tackles followed by Chris Rude with 6. Darion Phiffer added a fumble recovery while safety Lance Still had the lone interception for the Foxes returning it 42 yards.

The Foxes return back to Central Illinois this weekend, hosting the New Lenox (Lincoln-Way) Patriots, at the brand new SHG Stadium. This night will be more than just a game as the Foxes, their families, and fans take time to honor Allison Faith Hill. Allison is a 6 year old girl who was born with Down Syndrome and AV canal heart defect, she has experienced many difficulties and surgeries over her first 6 years of life, including needing to be fed via tube. Our goal for this fundraiser is to help raise the funds for her to be able to attend the Munroe-Meyer Institute for eating disorders, a place where she can be assisted in reaching her goal of being able to feed herself independently. Tickets for this contest will be buy one get on free. There will also be a halftime concert dedicated to Allison, along with a special jersey presentation, and many other events to help raise money and to celebrate her strength and courage.

For those who can not be in attendance, the game will be broadcast live from Sacred Heart-Griffin Stadium in Springfield, IL. The game will be brought to you by Krekel’s in Pawnee, on Taylorville’s Genuine Country 94.3 FM.