August 25, 2012 was a showdown in South Fork with a lot on the line for the 3rd year Springfield Foxes franchise. This is there second year in the MSFL. The Foxes had clinched a playoff spot one week earlier by winning 45-28 over the Indiana Mustangs in Indianapolis, thus finishing the 2012 campaign with a very respectable 3-1 record on the road. This would be their penultimate regular season home game of 2012 and their final game in Kincaid at John B. Pacotti Field. The Foxes had called Kincaid home since July of 2011, but new SHG Stadium in Springfield will be their new digs starting on 9-8-12.

This was also a pivotal contest to decide first place in their division (the Eastern Conference of the MidStates Football League) with the winner securing home field advantage, the #1 seed in the conference and a first round playoff bye. The loser would fall to the #3 seed and would not enjoy the benefits of the bye week. But this night would belong to the Foxes, as they pushed their record to 6-1 with a 21-8 win over the Chicago Thunder. The Thunder, who talked a lot of smack leading up to the game, were silenced by these Foxes on this night. The now 4-2 Chicago club went back home in a state of disbelief, as South Fork fans celebrated a Foxes Division Title at John B. Pacotti Field. 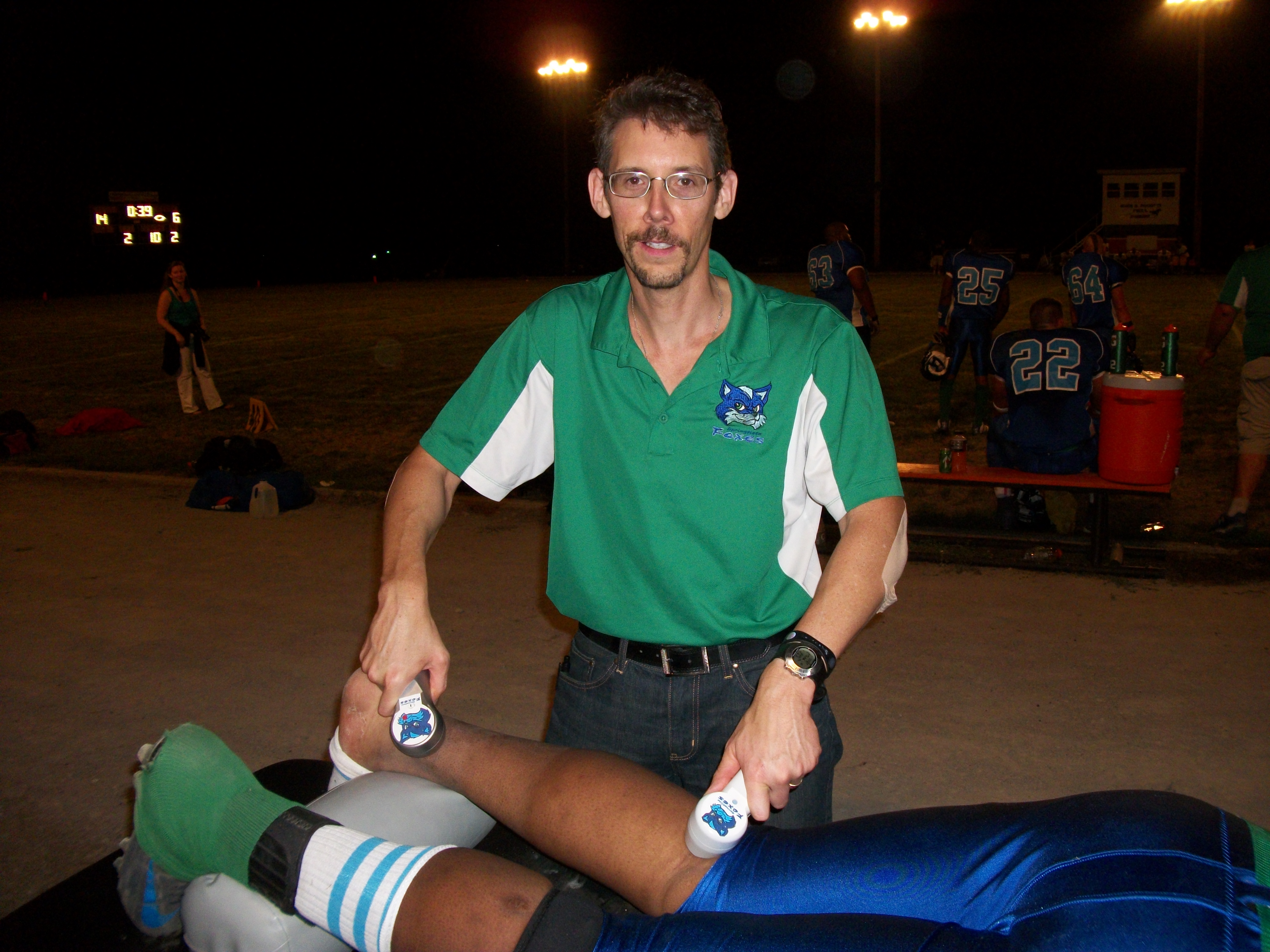 Dr. Austin, team D.C. and team trainer, utilizes two of his custom Springfield Foxes cold laser therapy devices (including his new PainBeGone Laser) on a player’s Achilles injury. Both laser devices have a depth of penetration of 5 cm. Both are outstanding when it comes to reducing pain, swelling, inflammation and edema.

As usual, Dr. Todd (Head Trainer & Team Chiropractor) and Eugena (Assistant Trainer & Team Massage Therapist) from Austin Family Chiropractic in Virden started treating the players about 70 minutes prior to kickoff. According to Dr. Austin “This was, without a doubt, the most important game to date in the history of the Foxes as an MSFL team. Eugena and I were prepared to do whatever it took to keep as many of our players in tip top shape as possible.” 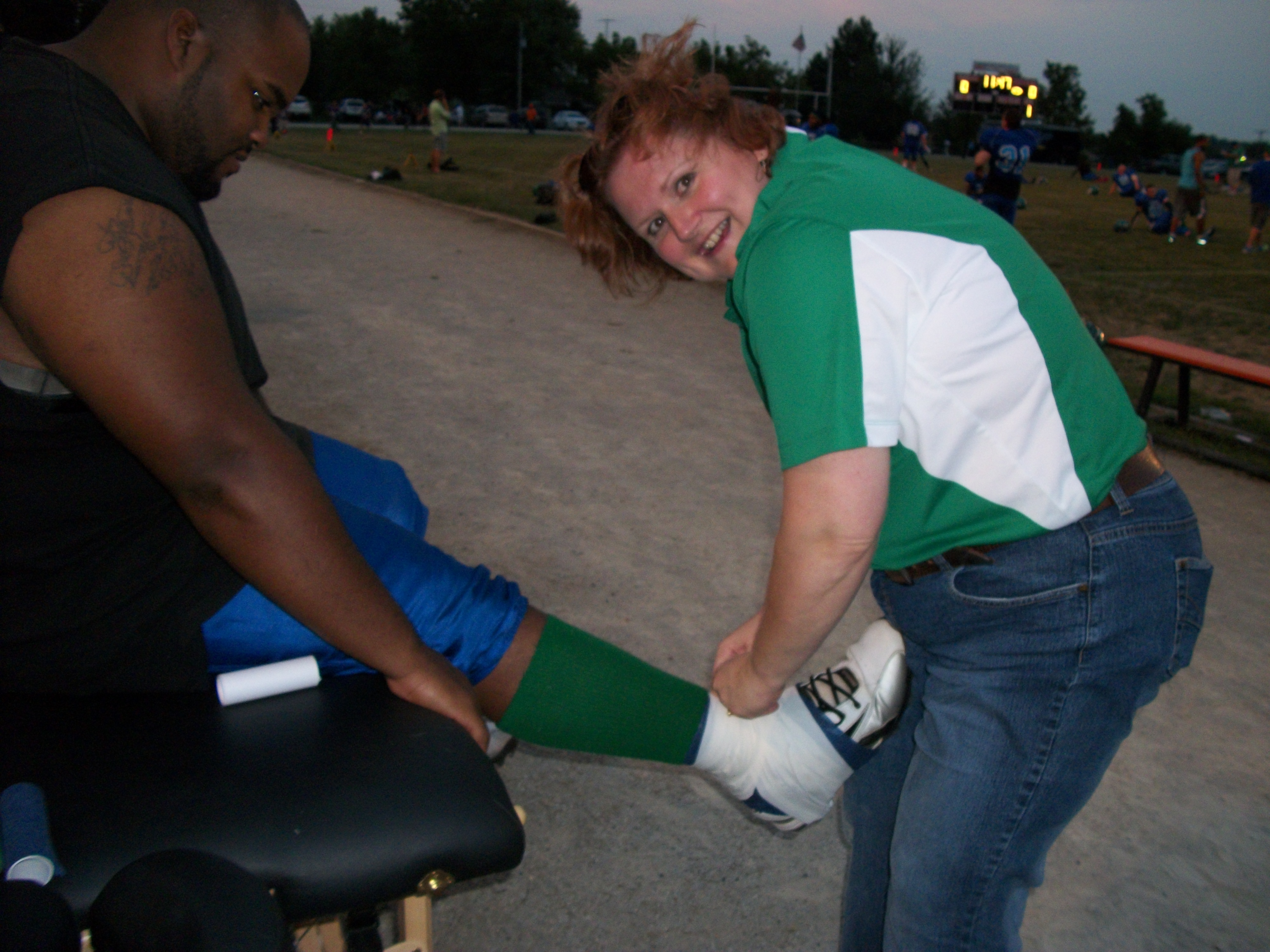 One of the defensive backs, #16 Lance Still, had been nursing a pulled hamstring for 7 days now, as it happened in the victory over the IN Mustangs. It’s a good thing that Dr. Austin is becoming very adept at a specialized taping technique for stabilizing such an injury. Todd performed the technique on Lance during pregame. As it turned out, #16 was firing on all cylinders, as he would be one of the defensive MVPs of the game: recording 2 solo tackles, 2 knocked down passes and 2 interceptions with 127 return yards on the night! After the game, Lance reported having zero pain and feeling 100%.

Team Chiropractor Todd Austin (right) with one of the games co-MVPs on defense. After helping out #16 Lance Still with an advanced hamstring taping technique, Still had 2 “picks” and over 125 return yards on the night.

Then Dr. Todd & Gena stayed busiest during this contest providing care for many calf, hamstring and quadriceps injuries in addition to some spinal issues. They also made use of three cold lasers on the sidelines including a new ‘PainBeGone Laser’ which just arrived at Austin Family Chiropractic a few days earlier. This night also marked the first time this season that Austin had to pull a player out of the game after suffering a Grade 1 concussion. “It’s definitely not the fun part of what we do on the sidelines,” states Dr. Austin “but we follow the same guidelines that have come down from the NFL. If we even just suspect a minor concussion, the player is out for a whole week. In the year 2012, traumatic head injuries in contact sports are taken very seriously!” 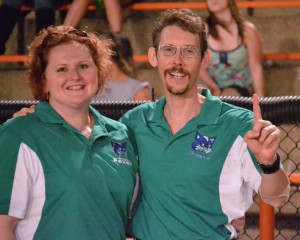 Dr. Todd & Eugena Austin on the sideline proclaiming their semi-pro Springfield Foxes team to be #1. The Foxes just clinched a division title and the #1 seed in the Eastern Conference of the MSFL playoffs with a convincing 21-8 victory over the Chicago Thunder.

According to Assistant Coach Jason Kirkendoll, a Kincaid native who played his JFL and high school football at John B. Pacotti Field, “Going out in style with a huge victory and by winning a division title in front of our South Fork fans is special!”. 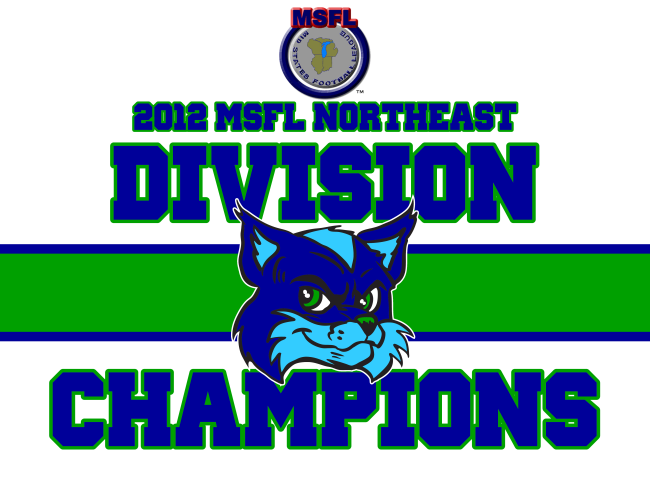 The official 2012 Springfield Foxes Division Champs logo. Austin Family Chiropractic is proud to be one of the sponsors who will assure that division championship t-shirts are provided to all of the Foxes players at the next home game at SHG.

The semi-pro Foxes return to their new $4,000,000 home at Sacred Heart Griffin Stadium in Springfield on September 8th to take on the Indiana Generals, with the Generals fighting for either a #4, 5 or 6 seed in the playoffs. A Foxes victory could send the Generals packing for an early offseason. All home games are broadcast on Taylorville’s Genuine Country 94.3 WMKR. The Foxes schedule and information are available at: SpringfieldFoxesChiro.com .