This Foxes pink helmet was raffled off on BREAST CANCER AWARENESS NIGHT.

During the 2011 season, the Indiana Generals reached the MidStates football League championship game, where they got spanked by the 2011 Champion Roscoe Rush. When the Foxes headed to Indianapolis to play them in 2011, it was ugly. The smack-talking Generals used social media to talk about how they would beat the (first year in the MSFL) Foxes by at least 80 points. The Generals rubbed it in by doing onside kicks and razzle-dazzle trick plays while holding a big lead. The net result was a final score that read: Springfield Foxes 0 at Indiana Generals 40. Some might think this to be a moral victory of sorts for the ’11 Foxes. The Foxes thought otherwise. 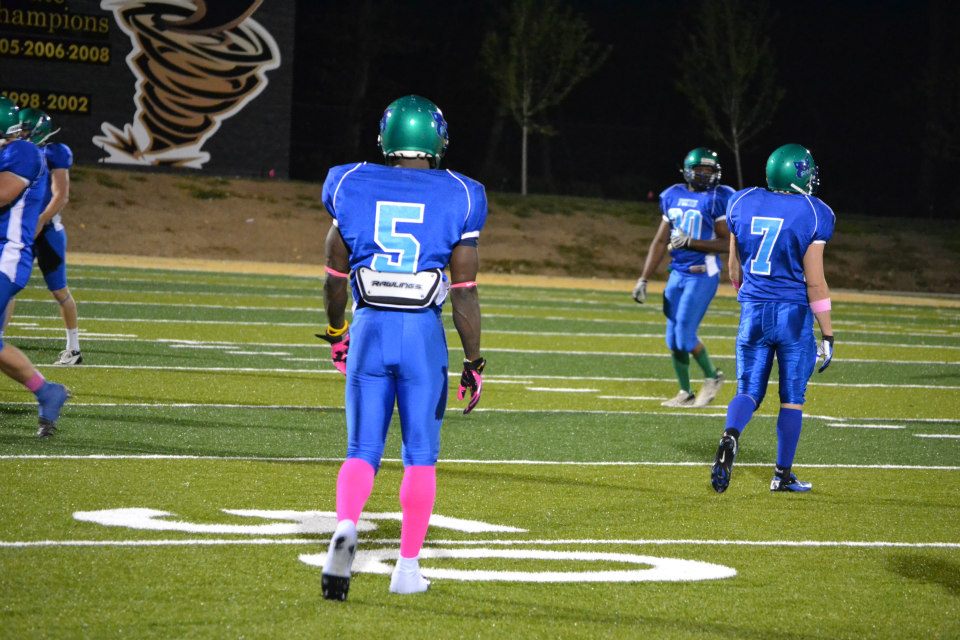 #5 Garland Walton, one of the on-field and inspirational leaders of the Foxes “D”.

But “karma is a b!tch” as the saying goes. On September 8, 2012, the Foxes would get there shot at redemption. Oh, would they ever! The Foxes were 6-1 and had already wrapped up the NorthEast Divison title, #1 seed throughout the East in the MSFL playoffs and a first round bye. So these Foxes had ABSOLUTELY NOTHING to play for right? WRONG! There was a score to settle when these hoosiers came a callin’ to our new digs at Sacred Heart Griffin Stadium.

On the other hand, the IN Generals were a dismal 4-3 and clinging to their playoff lives. It would have been great (the ultimate karmic repayment) if a Foxes win could have eliminated the Generals from playoff contention altogether. But the results of some of that evening’s other MSFL games secured these smack-talkers from the hoosier state either a #4, #5 or #6 seed. 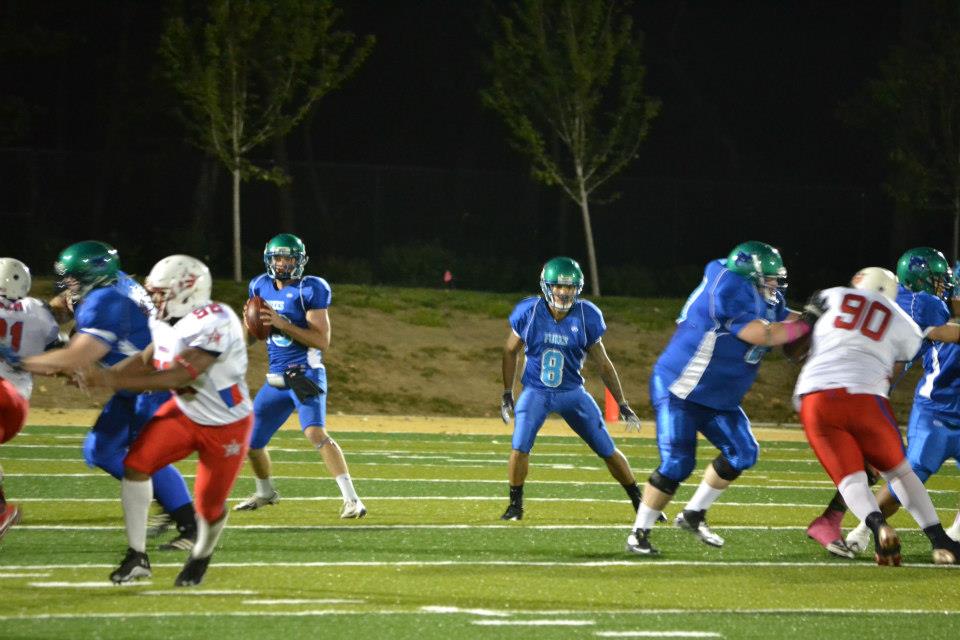 Foxes all-star QB #13 Drew Fendrich getting ready to torch the Generals “D” in the 2nd half!

At first it appeared to be deja vu, as the Generals jumped out to a commanding 21-0 lead early in the 2nd quarter. Uh-oh! The Foxes closed it to 24-6 at halftime. Then in the 3rd quarter the turning point was when #16 Lance Still, one of my favorite patients, intercepted a pass near midfield. (Yes, the same Lance who had 2 picks and was a defensive MVP in the previous game.) The Foxes offense punched it in a few plays later and never looked back. 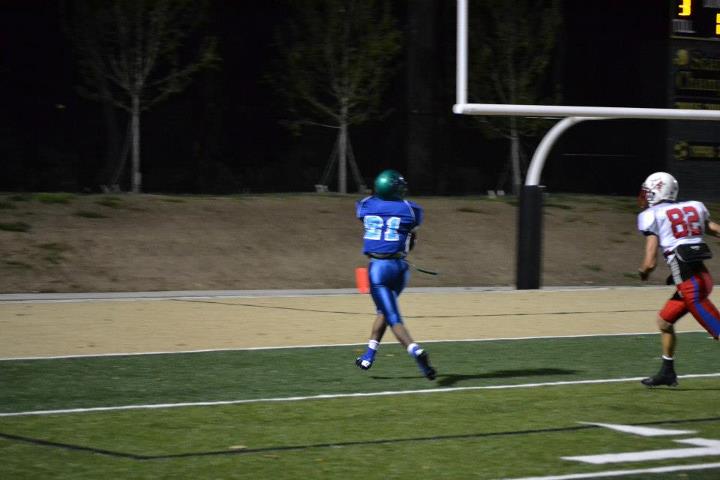 Here’s the TD that #21 Marcell Phiffer promised to score for my wife, Eugena. This after Eugena massaged and Biofreezed his shoulder and performed cold laser therapy on his recently fractured wrist during pregame. You da man, Cell!

In the 2nd half, it was all Foxes. Can you say “Total Domination”, boys and girls? I sure hope so. Yes, the mighty Foxes practically reduced the Indiana Generals to lowly 2nd lieutenants after the half. To say the Foxes delivered a punch in the chops would be a huge understatement. Second half scoring was Foxes 32, Generals 0. 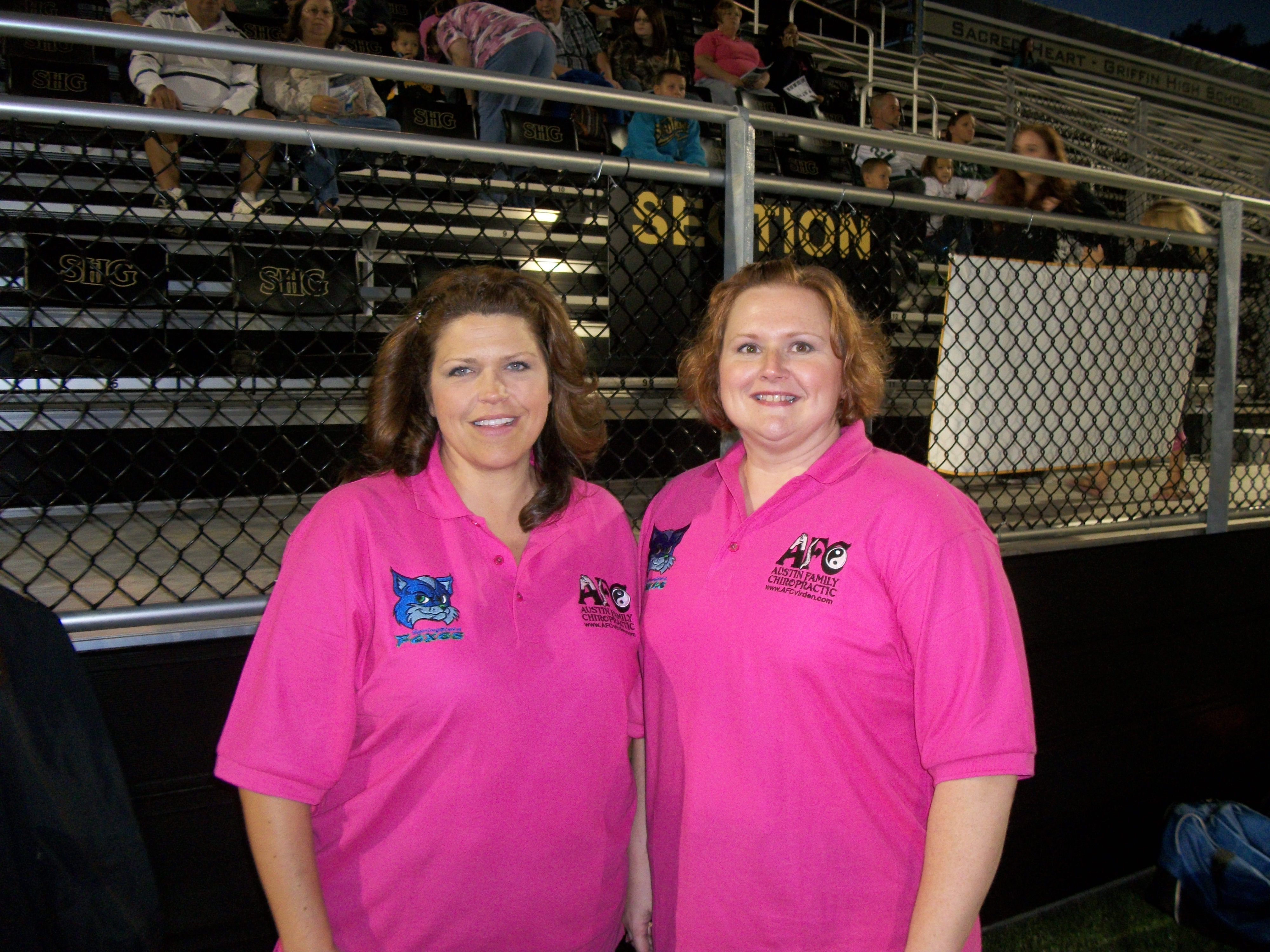 Nina and Gena, my 2 assistant trainers for the Foxes 2012 Breast Cancer Awareness Game. 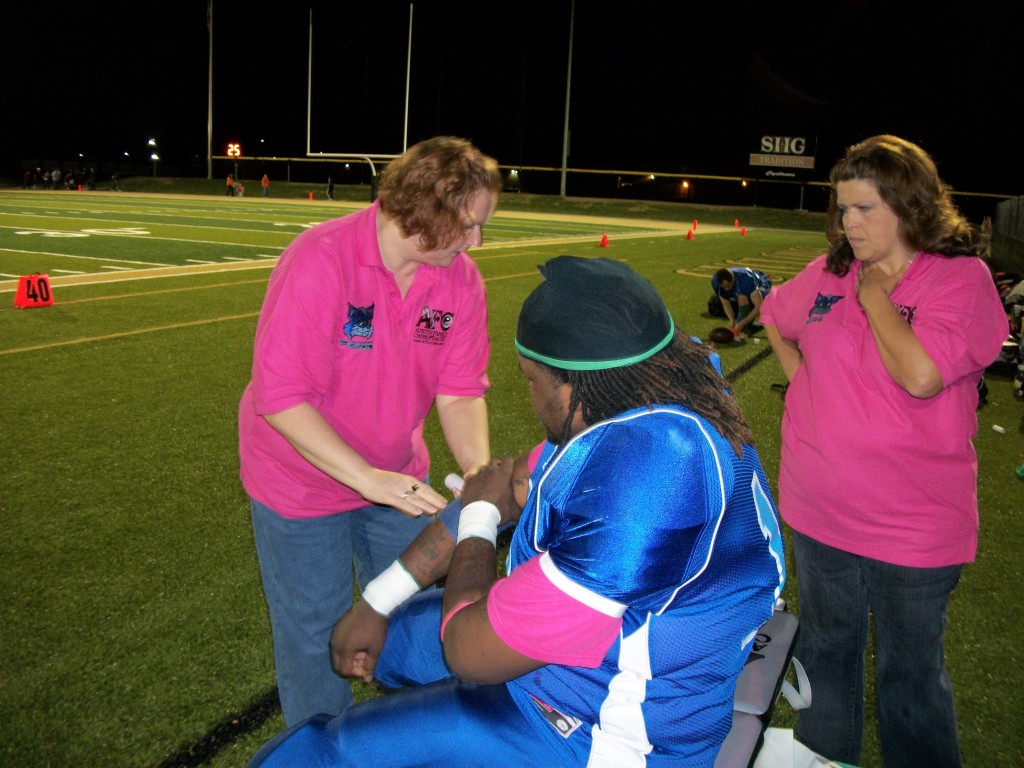 In other news to report on this night, the Springfield Foxes were hosting only the 2nd game in franchise history at state-of-the-art SHG Stadium. Approximately 250 screaming Foxes fans were in atttendance. It was also the team’s ANNUAL BREAST CANCER AWARENESS NIGHT in conjunction with the MSFL’s annual breast cancer awareness week. So many players could be found sporting some pink. The Foxes even raffled off a pink helmet autographed by all the players, with the proceeds donated to breast cancer awareness! The idea for this fund-raiser belongs to #45 LB Michael Rose.

Dr. Todd Austin leukotaping #1 Gary Miller for a pulled hammy during the 1st half.

Eugena (team massage therapist and assistant trainer) and I even ordered special pink polo shirts for the event. A friend of ours joined us on the sidelines in pink as well. Nina Van Buskirk, like Eugena, is also a LMT (Licensed Massage Therapist). Her massage practice is located in Virden, IL as well. She assisted us with massaging, cryotherapy and kinesiotaping on the sidelines. The 3 of us stayed fairly busy working our magic on the sidelines once again, before, during and even for a little while after the victory. 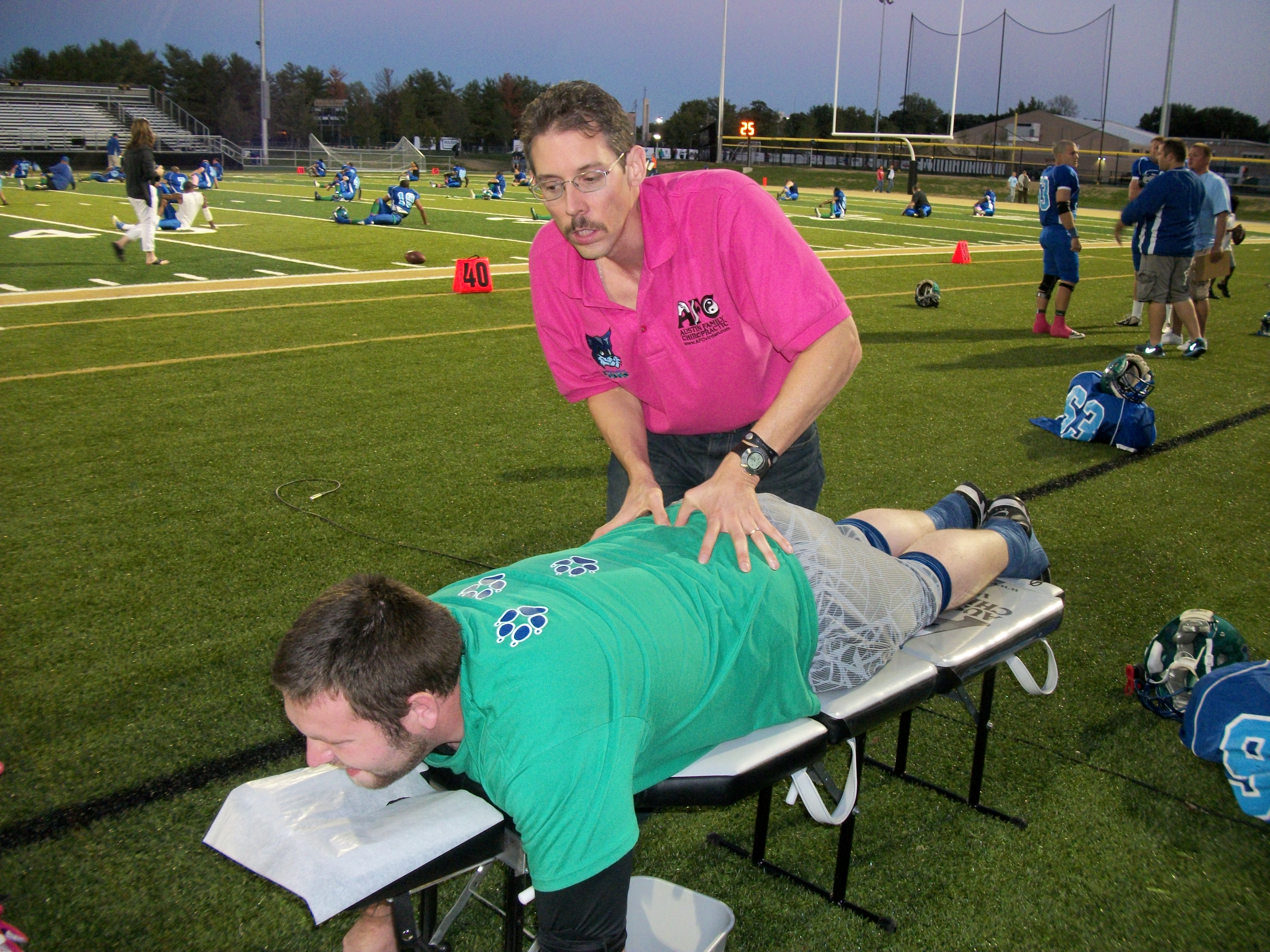 Our Foxes QB isn’t just one helluva gunslinger, but he’s a tough guy too! If you don’t believe me, watch this video clip and see for yourself!

YouTube video of our Foxes QB taking out a defender.

The IN Generals player that our QB levels here in the 4th quarter was still woozy getting on the bus to head back to Indy. Wow! #13 was bringing it in more ways that one of this night.

After the game, emotional leader Garland Walton addressed the team saying “Fellas, I’ve been waiting 365 days to beat these guys. Thank you, thank you, thank you!”
Payback has officially been served, Garland! The Generals would leave Springfield on that night with their tails tucked between their legs.

Team Trainer and Chiropractor for the 2012 Springfield Foxes 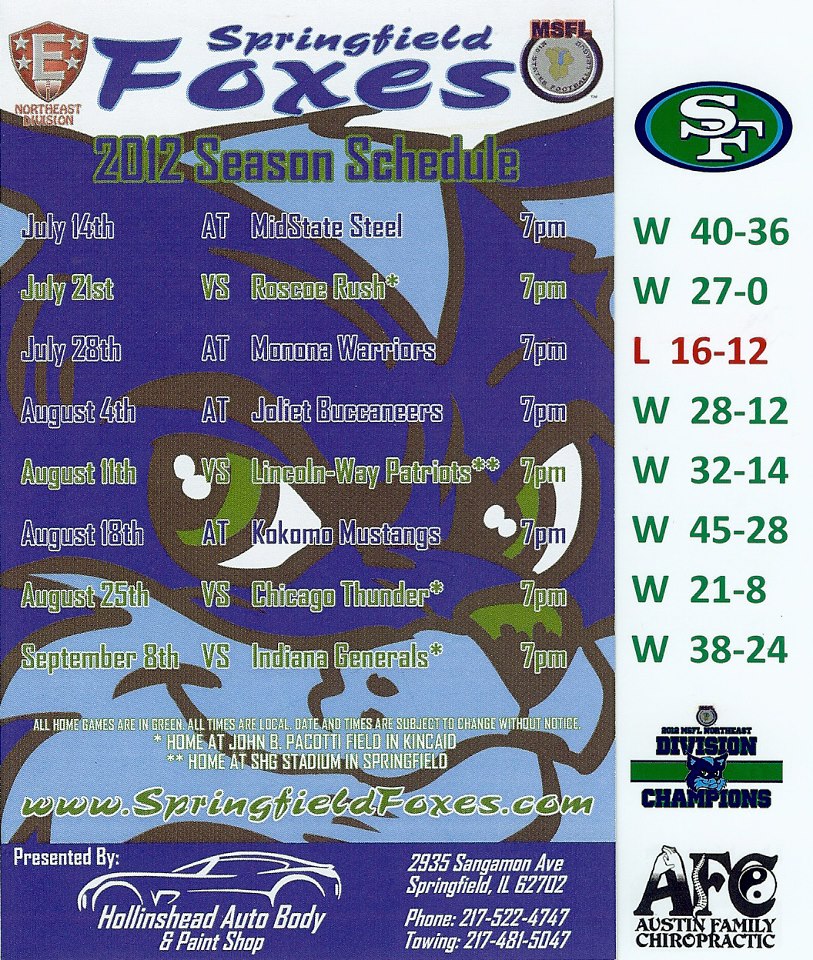