Eugena and I stayed very busy on the sidelines during Saturday night’s barn burner between the visiting Chicago Thunder and your Springfield Foxes.  As did we before and after the contest as well.

The rains and storms rolled in and moved back out just in time to make the weather conditions perfect for gametime.  The first 2 home games, we had heat indexes in the ’90’s, which means that we had players sweating all over us and our equipment.  It goes along with the territory, but for a clean freak like myself, it’s a bit gross.  For example when I perform a ball & socket joint shoulder adjustment, the patient’s upper arm is resting against my chest (ie, touching my shirt).  Anyway, the gametime temp was about 70 degrees which equates to much less sweating and absolutely no profuse sweating!  Hey, that’s kind of comparable to the 70 degree temps in our clinic.  Woo Hoo! 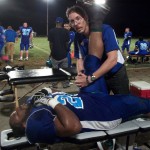 Dr. Austin helps to stretch out a tight hamstring tendon in the early 4th quarter.

Eugena stayed busiest this game working on lower backs and hamstrings.  While yours truly stayed busy adjusting lower backs and sacro-iliac joints (pelvis area) as well as examing, adjusting & lasering shoulders.  The Biofreeze spray was a hit with the players and fans once again.  If there’s one thing I’ve learned in my 18 years of chiropractic practice, it’s that ‘You can’t go wrong with BIOFREEZE.’ 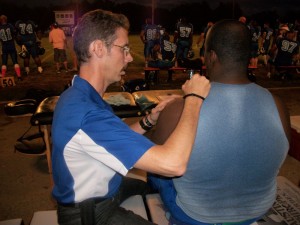 Overall, this was one monster of a game.  Unfortunately, the Foxes missed a few opportunities and left some points on the field.  The Foxes defense however came up with a tremendous goal line stand at one point which led to a turnover on downs.  The Foxes D also stood tall in the mid 4th quarter during a 20-20 tie.  The Thunder were in field goal range when the Foxes forced another turnover on downs. 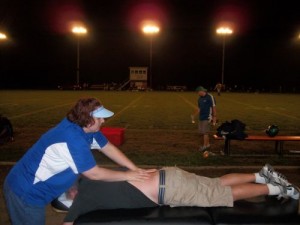 Eugena even kept busy for a while after the game massaging fans!

But in the end, the Chicago Thunder came out on top after converting a 4th & 17 with under a minute left in regulation time.  A few plays later, Chicago found the endzone with :18 remaining to seal a hard-fought 26-20 victory over the Springfield Foxes.

The Foxes fell to 2-3 and will need to pick up a win on the road to pull back into the playoff hunt in the MSFL’s Eastern Division.  These guys are really only a few plays away from being 4-1.  Unfortunately, the last time I checked, being close only counts in horse shoes or hand grenades.  So hopefully some ‘road cooking’ will fire up the troops like it did last weekend in Madison, WI when they brought home a 52-7 victory!

Yes, the Foxes have 2 road contests coming up before the final home regular season game on September 10, 2011.  All of us associated with the Springfield Foxes are grateful for all of the support and are hoping that you can make it out to the stadium for that one.

One thought on “We stayed pretty busy before, during & even after a gut-wrenching Foxes loss to the Chicago Thunder on Saturday night.”