Please allow me to catch you up to speed on the happenings over the past month of your Springfield Foxes.  For those of you that don’t know…. I’m the team Doctor of Chiropractic while my wife serves as the team’s Licensed Massage Therapist.

The Springfield Foxes took it on the chin from the then undefeated Indiana Generals in Indianapolis by a score of 40-0 back on August 20, 2011.  [I don’t know any specifics as I don’t travel with the team to road contests.]  With the Foxes falling to 2-4, it would have been easy to just throw in the towel and declare the 2011 campaign a complete disappointment.  But not these SPRINGFIELD FOXES!

The resilient bunch of Foxes regrouped in a big way!  Yes, they took it to the Plowmen in Kankakee on August 27th, by a score of 30-0, remaining in playoff contention.

The team had a bye week over the Labor Day weekend.  However some of the Foxes did find time for a football card signing session at the Springfield Old Navy on Saturday, 9-3-11 as well as being involved with the Kincaid Labor Day festivities on 9-5-11.

Then it was time for the season finale before our home fans last night, 9-10-11.  The Foxes hosted the Lake County Steelers.  The weather was perfect.  A special guest was even in attendance, Mr. Winston Taylor.  Winston is a U of I alum who played two seasons in the NFL for the Miami Dolphins.  He is currently running for state office.

The guys kept Eugena and I busy for approximately 1 hour leading up to game time.  We performed a lot of taping and biofreezing.  Gena performed some lower back, calf & hammy massages, while I primarily adjusted low backs, sacro-iliac joints, wrists, ankles and knees.  I also did some cold lasering as well.

We got busy again at halftime and in the 3rd quarter doing mainly hamstring stretching, biofreezing and performing low back adjustments along with hammy & calf massages.

This was actually the first game that we handed out NO icepacks.  These guys were ready to rumble and were clicking on all cylinders from the get go.  They opened up a 21-0 lead with 5 minutes remaining in the 1st quarter.  What can I say, ever bounce just seemed to go our Foxes way during this one.  I sort of felt bad for the other team, as only 16 players made the trip from IN.  The Foxes fielded 25 players that dressed.

In the end, the Foxes laid the law down with a solid 62-0 victory.  The game was special for 2 particular players that I know of on the defense.  Both #77 Eric Vollbracht & #70 Jason Kirkendoll will be hanging up their cleats, retiring as semi-pro football players and thinking about moving into coaching with the 2012 season.  It was extra special for #70 as he was playing his final game as a player on the same field where he began his high school football career as a Kincaid South Fork Pony.  Congrats to all of the Foxes for ending the season by outscoring their opponents 92-0 over the final 4 halves of football.

Unfortunately, a couple of hours later, we found out that the Mid State Steel (the team we defeated in Week # 1) laid claim to the final playoff spot.  Thus the Foxes had been eliminated.  It’s a good thing for the rest of the league, as the Foxes had truly found their mojo and probably would have made some noise in the postseason!

Jason Kirkendoll signs an autograph for a young fan. 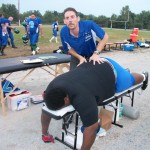 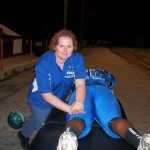 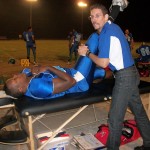 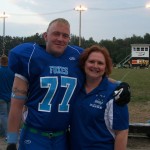 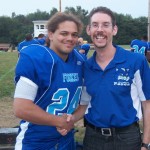 It was a fun year and a great experience.  Eugena and I thoroughly enjoyed getting to know the players and providing our chiropractic and massage services on the sidelines.  And we count our blessings that neither our Foxes players or their opponents  experienced any major (emergency situation) on-the-field injuries during any of our 2011 home contests.  Although we’d like to give kudos to the Kincaid EMT crew that attended all 4 home contests just in case their life-saving services would be needed.

5 thoughts on “Springfield Foxes outscore opponents 92-0 in final 2 games. The 2011 season finishes on a high note!”