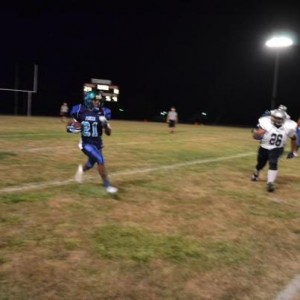 Kincaid, IL – The Springfield Foxes hosted the defending two time Mid States Football League champion Roscoe Rush, and pulled off their biggest upset of the year thus far, beating the Rush 27-0.    After a defensive stop on the opening drive by the Rush, QB Drew Fendrich and the Foxes offense went to work, finding Chris Hampton down the right sideline for the first score of the night.   In the second quarter, things continued to look like it was going to be a power struggle, with neither team scoring again until late in the 2nd quarter when Drew Fendrich hooked up with TE Jamel Ward for a 31-yard touchdown. A failed Foxes extra point attempt made it 13-0 going into the locker room at the half.

Late in the third quarter, Fendrich would find Hampton again, this time on the left sideline for a 58 yard touchdown putting the Foxes up 21-0 after the two point conversion.   The Foxes defense was on display most of the night, with almost every player on the field getting in on the action, led by linebackers Jae Russell and Chris Rude with 6 tackles each. The Foxes were able to get pressure this week, with Darion Phiffer, Marcell Phiffer,and Garland Walton all recording 1 sack apiece.

The turning point in the fourth quarter came when Craig Rolfe picked off a pass over the middle, but was unable to return it due to an inadvertent whistle. Then, on the final play of the game, the Rush went for the end zone, only to be intercepted by Marcell Phiffer who proceeded to return the pigskin 103 yards for the final score as time ran out.  The return of 103 yards broke the MSFL record for longest interception return, which Marcell tied last season.

Cold lasering a player’s shoulder before the Foxes vs Rush game. 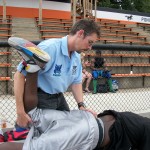 Dr. Todd Austin performing a low back exam prior to game time. 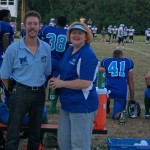 Dr. Todd & Eugena Austin catch a chance to relax on the Foxes sideline. 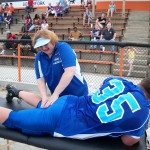 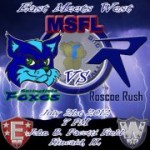 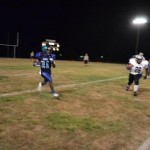 #21 Marcell Phiffer puts an exclamation point on the end of this Foxes vs Rush contest with a 103 yd pick six on the final play!

2012 is Dr. Todd Austin’s 2nd year as team Chiropractic Physician and trainer for the Springfield Foxes.  It is Eugena Austin’s 2nd year as team Licensed Massage Therapist and assistant trainer as well.  Both Dr. Todd & Eugena from Austin Family Chiropractic in Virden show up approximately 90 minutes prior to game time for all home contests so that they can help out the players prior to kickoff.

Saturday night, Dr. Todd and Eugena stayed incredibly busy working on over a dozen players who presented with shoulder issues, both acute (ie, happening during the win over the Rush) and chronic.  They provided chiropractic manipulation, cold laser therapy, therapuetic massage and cryotherapy as needed for these issues as well as for some mid back. low back and pelvis issues that needed addressed on the Foxes sideline.   Dr. Austin is an associate member of the Pro Football Chiropractic Society.  For more info about their work with the Foxes, please visit: http://SpringfieldFoxesChiro.com

Eugena even worked on one of the Roscoe Rush players at halftime, after he suffered a knee injury late in the 2nd quarter.

One of the first players that Dr. Todd & Eugena took care of using their tag team approach prior to the game was #21 Marcell Phiffer.  Marcell looked up Dr. Todd in the 3rd quarter to tell him that this is the best his “shoulder has felt in a long, long time”.  Then as mentioned above, #21 snagged a Roscoe Rush pass in the Foxes endzone with 8 seconds left on the game clock and took it 103 yards to the house to set a league record for interception returns!  After the game, as Dr. Austin was removing Marcell’s wrist tape and Eugena and their 9 year old daughter were removing his ankle tape, #21 told Dr. Todd & Eugena “that touchdown was for the Austin’s for getting my shoulder feeling so good”.  What can the folks from Austin Family Chiropractic say other than “We are extremely honored!”.

Prior to this contest, the Roscoe Rush had not lost since September 4, 2010 and had not been blanked since June 13, 2009.  So any way you slice it, this was quite an impressive display by the Foxes on Saturday July 21, 2012 at John B. Pacotti Field in Kincaid, IL.

With this victory, the Foxes are now 2-0 for the 2012 campaign.  Dating back to last season when they narrowly missed the MSFL playoffs, these Foxes are currently riding a 6 game winning streak.

The Foxes will next face the Monona Warriors in Wisconsin on Saturday August 28, 2012.

Their next home contest will be at new state-of-the-art Sacred Heart Griffin Stadium in Springfield, IL at 7 PM on Saturday August 11, 2012 when the Foxes will host their bitter rivals from the North, the Lincoln-Way Patriots.  The Foxes vs. Pats game will include a special benefit for a year old young lady named Alli Hill who is in need of some important medical care.